Hey there! So I recently receive a pretty busted up NGCD and a couple of games, the power port seems wobbly and RGB doesnt pipe out.

I also received two NGCD controllers, both of which had directional input issues. I learned online that you can take the pads out of working switches and pop them into broken ones. I ordered a second controller from eBay and conveniently missed that it was untested and also had one busted switch.

Nevertheless I had enough to get two working controllers, but gutting old ones really bothers me, at some point in the future there wont be any left right?

Well I started reading up about them and learned that whatever switches they use have stopped being made or were never available for the public. During my repairs I noticed that its the tension from the spring that actually presses the button. So I looked up the nearest microswitch I could find, the RACON8, I bought a few on the off chance they’d just work but nope.

The RACON8 switch actually fits perfectly where the old NGCD switches fit, which is great, but the main problem is the surface area of the actual button, and the tension required press it, the old NGCD spring is not enough to press it by itself… 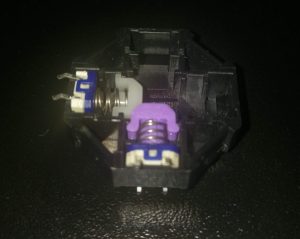 So I got to thinking, there’s a little white bit of plastic that the stick presses against, which in turn pushes on the spring, which then exerts enough pressure on the switch.

Well I though, if I could extend that bit which holds the spring in place on the white piece of plastic to physically press the button, while still giving enough leeway to the stick, we’d have a viable alternative to fixing the NGCD controller which doesn’t involve gutting them. 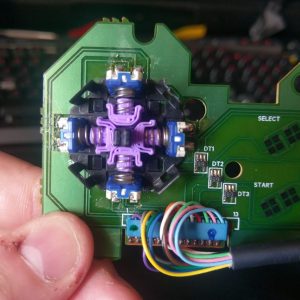 It feels great, I’m a big Windjammers fan and can play just as well using this compared to my “og switch” controllers. The only bad thing about it is that it no longer gives that ultra satisfying click, but other than that, have had zero issue throwing curves etc.

You can buy RACON8 switches pretty readily from anywhere that does stuff like that.

You can grab the plastic gate bit(?) from my thingiverse here: https://www.thingiverse.com/thing:3007837